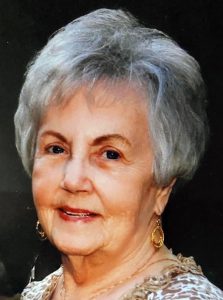 Beverly attended Holy Angels Catholic School until 8th grade. She then attended St. Teresa’s Academy for Girls, from which she graduated 12th grade. After high school she attended and graduated from Brown’s Business School.

She married Robert Wiedwilt on June 26, 1948 and shortly after began their family. Beverly spent a few years staying home as a mother caring for her five children. When the family moved here, she then took employment with the Washington County School District working as their bookkeeper, while also working daily at the Johannisburg Grade School, as secretary. She kept this position for 13 years.

In 1971, she joined her husband,“Bob,” and together they formed a tile business called, Wiedwilt Tile Company. For many years, Beverly worked there daily doing the bookkeeping and helping Bob with bidding on projects. They officially closed their doors and both retired in 2005.

Beverly enjoyed her times spent with family whether it was parties for celebrations, attending sporting events, the eight years they spent enjoying Punta Gorda, FL or the many years spent in their cabin at Lake of Egypt. She also enjoyed time with her dear friends just to visit and play cards with, which they had all done for well over 50 years. Beverly always looked forward to the annual lunch reunion with her fellow 1948 high school graduates.

She dearly cherished her family and was very proud of them all. Beverly was a devoted, wife, mother, mother-in-law, grandmother, great grandmother, aunt, great aunt and great-great aunt, who was fondly called “Nana”, by all. She was a positive force and a bright light to anyone who was fortunate enough to have met her.

Don’t think of her as gone away

Life holds so many facets,

This earth is only one.

Just think of her as resting

From the sorrows and the tears,

In a place of warmth and comfort

Where there are no days or years.

In lieu of all other gifts, memorials may be donated to Addieville Fire Department, P.O. Box 109, Addieville, IL 62214. Condolences may be shared with the family by visiting mollfuneralhome.com

Funeral: Cremation was her final request. There will be a private memorial mass held at St. Anthony’s Catholic Church in Lively Grove, IL.