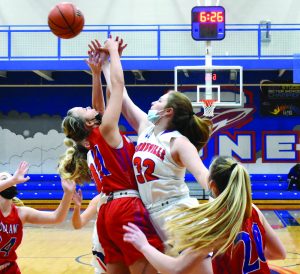 With three more wins over the last week, the Okawville Lady Rockets remain unbeaten a dozen games into the season.

Mater Dei visited the O-Rena last Tuesday, and the Lady Rockets used a big run in the second half to notch a 56-31 win.

Leading by a dozen points at halftime, Okawville blew the game open with a 20-5 run in the third quarter that put the contest out of reach.

Three Lady Rockets hit double figures in scoring, with Alayna Kraus leading the way with 18 points and four rebounds. Briley Rhodes scored 13, Madisyn Wienstroer had ten of her own, and Sydney Tebbe pulled down four caroms in the win.