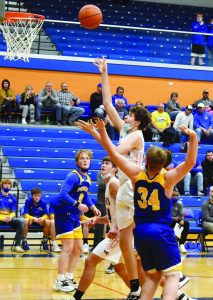 The Rockets hosted the Trico Pioneers Tuesday night in their home opener and pulled out their first victory of the season with a 40-37 win.

A strong defensive effort in the opening quarter allowed the Rockets to seize early momentum and jump out to a 9-4 lead.  Three inside buckets from Andrew Savard and Aidan Anderson, and a runner from Ethan Riechmann got the Rockets going on the offensive end.

After the cold start, Trico bounced back early in the second quarter and tied the game up at 14. The Rockets regained their composure and used their defense to fuel another run as they regained the lead and went into the half with a 21-15 lead.

Despite managing just 15 points in the first half, Trico came right at the Rockets in the third quarter and put up eighteen points to take a 33-29 lead into the final frame.