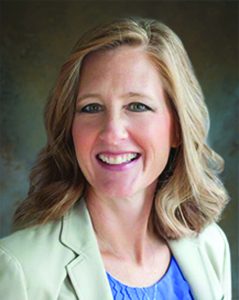 For Donna Luechtefeld -Tebbe, IBCA Hall of Fame enshrinement is something of a family tradition.

Tebbe will be among the newest inductees into the Illinois Basketball Coaches Association Hall of Fame, joining her father and brother.

Basketball might as well have been imprinted in her DNA. “I was around basketball  all the time, so I really grew up with it,” she said.

Her father Dave coached at Okawville for decades, and her brother Jeff was a standout for the Rockets. It is little wonder that Tebbe embraced the game as well.

“Basketball was always part of our lives,” she said. “I remember going to Rocket games as a kid, and it was always so fun.”

Tebbe’s list of accomplishments for the Lady Rockets is long: 1,855 career points to go with 1,033 career rebounds. She was a key member of Okawville teams that won two regional titles in the two-class system, when regional titles were much more difficult to win.

As a coach’s daughter, Tebbe says her father helped her as a player. But she also says that her own coach Kathy Lanter was a big part of her success.

“Kathy helped me so much as a player,” she said. “She was my eighth grade coach before she was hired as the high school coach, so I got to play for her for five years.”