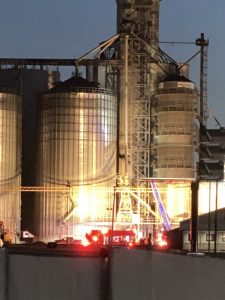 Firefighters from four area fire departments battled a fire a the Gateway FS elevator in Nashville for about three hours last Thursday.

The Nashville Fire Department was called at just after 4 p.m. Thursday, and departments from Addieville, Hoyleton and Ashley were on scene soon after.

Nashville Community Fire Protection District Fire Chief Alan Hohlt said it was a very difficult call because of the location of the fire.

According to Hohlt, the fire was in the grain leg of the elevator, which transports the grain from the ground level into the bin.