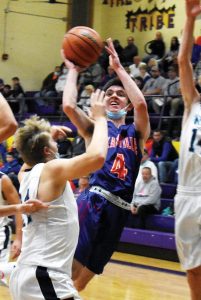 The Rockets returned to action last Tuesday night at the Kaskaskian Classic and fell to the Nokomis Redskins 54-29.

Three early three-pointers from junior Dillon Teter tied the score up at 9-9 before the Redskins closed the quarter on a 7-0 to a 16-9 lead.

Nokomis continued the hot shooting in the second quarter as they erupted for 20 points including a three pointer at the buzzer to take a 36-19 lead into half.

Cold shooting continued to slow the Rockets down in the second half as they managed just ten points.  The Rockets fell 54-29