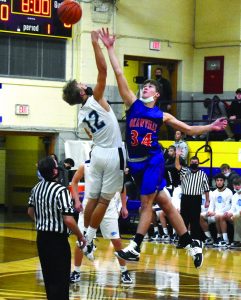 The Okawville Rockets kicked off their season in the Kaskaskian Classic Saturday afternoon with a 52-31 loss at the hands of the Pinckneyville Panthers.

Cold shooting and costly turnovers dug the Rockets an early hole that they were never able to recover from.

After falling behind 7-0, senior Ethan Riechmann got the Rockets on the board with a driving layup. Unfortunately, the Panthers would respond with another 9-0 run and pushed the lead to 16-2. Two late three pointers in the quarter from Riechmann and Wilson Welch trimmed the lead to 20-8 at the end of the first quarter.

The Panthers responded in the early stages of the second quarter with another run, using Rocket turnovers to fuel some easy fast breaks that pushed the lead to 33-12 at the half.