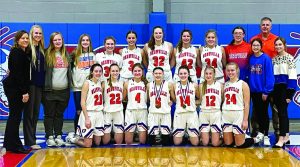 After winning their opener at the O’Fallon Shoot-out, the Okawville Lady Rockets reeled off four straight wins to win the championship of the Nashville Thanksgiving Tournament last week.

Okawville beat Mascoutah 67-33 in the tournament opener last Monday and stayed hot with a 56-30 win over Pinckneyville Tuesday.

The Lady Rockets held Pinckneyville to just 13 points in the first half and extended their lead in the second half to secure the win.