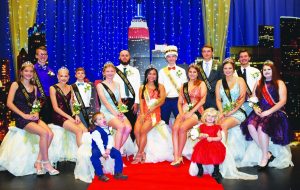 Cole Wiedwilt and Zoe Todd were crowned Okawville High Homecoming King and Queen at the dance held at school Saturday.

Cole is the son of Ryan and Dee Wiedwilt of Addieville. Zoe is the daughter of Paul and Heather Todd of Okawville.

Pages: Lance Dressler, son of Eric and Clara Dressler of rural Venedy, and Ada Kurtz, daughter of Charlie and Erin Kurtz of Okawville.

Retiring Queen (2019) Anna Schmersahl is the daughter of Kim Schmersahl of rural Marissa.