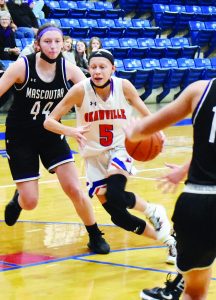 It has been a fast start for the Okawville Rockets, as they have yet to trail in their wins over Hazelwood Central and Mascoutah.

Okawville opened up the season Saturday in the O’Fallon Shoot-Out, where the Lady Rockets easily handled Hazelwood Central by a score of 55-22.

After building an early 11-5 lead in the first quarter, Okawville turned it into a blowout with a 20-3 run before halftime that put the game out of reach.