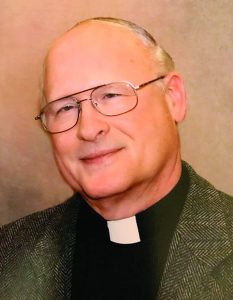 “Hymns from Our History” is the title of a hymn festival set for Sunday, November 21 at 7 p.m. at St. John’s Lutheran Church in New Minden. The service will be preceded by a short organ recital at 6:30 p.m.

The Rev. Dr. Arthur Eichhorn will serve as guest organist. Pastor Tim Mueller, who has served St. John’s since his ordination there in 1988, will share devotional anecdotes (with pictures) from the Congregation’s long history, focusing on hymns that were known to be sung on various occasions.

Comments Pastor Mueller, “Hymn writers have a gift of taking the truth of the Scriptures, both Law and Gospel, and putting them into words that sing the faith into the human heart. The singing of Christ-centered hymns has been one of the ways God has sustained the Congregation through many trying times, including drought and pestilence, the Civil War, two World Wars, the Great Depression, and three tornadoes—not to mention countless personal losses. They have also voiced praises to God over blessings received and prayers answered. We plan to tell the story of various occasions, look at some pictures, examine the hymn that was sung and its supporting Scripture, and then let God speak to us anew as we sing the hymn.”

Half of the offering will go toward the St. John’s Organ Fund (for tuning and maintenance) and half toward LCMS Disaster Response, which was very supportive of St. John’s in the aftermath of the November 17, 2013, tornado.

In his pre-service recital Pastor Eichhorn will play compositions by Bach, Manz, Karg-Elert, Vierne, and Widor.

The festival is part of a year-long celebration of St. John’s 175th anniversary under the theme “Rooted and Growing in Christ.”  The Congregation was organized November 8, 1846.  On that day, C.F.W. Scholz (trained in Germany by Pastor Wilhelm Loehe and sent to New Minden by Pastor C.F.W. Walther) was ordained and installed as pastor, a congregation was chartered, and Friedrich Hoffman donated 55½ acres to the new congregation—a farm he had purchased for his son Carl, who had recently died just shy of his 19th birthday.  (The Congregation still owns 42 of those acres today.)

Other events planned for the anniversary include—

· Spring, 2022, Old fashioned “church raising” – God willing, the 1847 church/school/parsonage/shed, a 20’ x 33’ timber frame structure flattened in the 2013 tornado, will be rebuilt as the “Jesus Sends You Missionary Chapel.”

Because of changing COVID-19 guidelines, etc., those who plan to attend are urged to go to the church’s website, stjohnsnewminden.org, click on “175th Anniversary,” and check for updates.