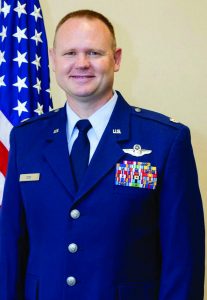 Former Okawville resident Lt Col Brandon Dow was honored at his retirement from the Air Force at a ceremony Friday at Scott Air Force Base.

After his graduation from Okawville High in 1997, Dow attended Cedarville University in Ohio. Seeking a military career, he participated in the AFROTC program.

He was commissioned by his father, Col. Ryan Dow in 2001.

Dow served two years at Kirtland AFB in Albuquerque, New Mexico, as one of the top 10 percent of all lieutenants.

In his quest to become a pilot, Brandon took private flying lessons after he was not initially accepted into AF flight training.

He was later selected for pilot training at Vance AFB in Oklahoma.

His next assignment was Charleston AFB in South Carolina, flying C-17s for 4 1/2 years.

He had three deployments to the Middle East, being gone 18 out of 24 months while his wife, Becky was home with their young children.

As Dow’s career advanced, he was the Flight Commander and Chief of Wing Plans, flying C-17s.