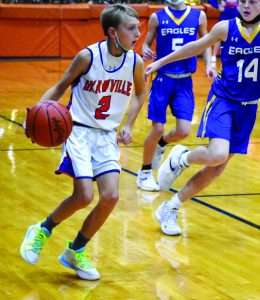 On November 9th the Okawville Junior High School Junior Rockets hosted the Aviston Eagles for the opener of the Clinton County Conference schedule.

Okawville struggled on the offensive side of the court for much of the game and was down 32-9 at halftime. The scoring drought continued into the second half, and the Eagles defeated the Junior Rockets 55-17.