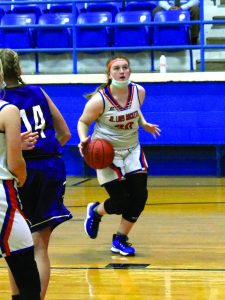 The Junior Lady Rockets started the week with a 41-12 win over St. Ann Nashville in the Okawville Tournament last Tuesday.

An 8-0 run by Okawville in the second quarter put the Lady Rockets in control, and the Lady Saints were unable to chip away at that lead in the second half.

Okawville was on the wrong end of 26-13 score against Nashville last Friday at the Okawville Tournament.

Rhodes paced Okawville with eight points, Hackstadt and Behrmann finished with two points apiece, and Tepe rounded out the scoring with one point.

Nashville was the winner of the Okawville Girls Basketball Tournament.