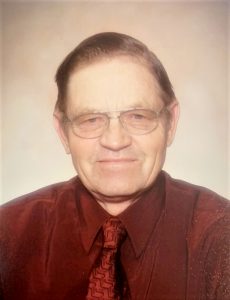 Mr. Edmond Brammeier of Okawville, IL departed this life in the extended care unit of the Washington County Hospital in Nashville, IL on Sunday, October 31, 2021 at 7:55 A.M. He had attained the age of 86 years, 4 months, and 10 days.

Edmond was born in Hoffman, IL on June 21, 1935 the son of Emil and Quinta (nee Knolhoff) Brammeier. He was united in marriage to Alrene Rennegarbe in the Olive Branch Lutheran Church in rural Okawville on June 26, 1955 and she preceded him in death on May 19, 2018.

Mr. Brammeier served in the United States Army and was stationed in Anchorage, AK as a blacksmith and welder. He was a lifelong dairy and grain farmer and was a member of the Washington County Farm Bureau and was especially proud of his work as a Director for Prairie Farms Dairy. He was a former member of the Olive Branch Lutheran Church in rural Okawville where he had served as an Elder and had held various positions of leadership. Edmond was a current member of the Immanuel Lutheran Church in Okawville where he had served as an Elder, a Trustee and had served on the church council. Mr. Brammeier was also a former member of the Okawville Community Club. Edmond enjoyed collecting antique milk bottles and going antiquing with his wife Alrene. He especially loved spending time with his family.

In addition to his parents and wife, he was preceded in death by a brother, Delbert Brammeier; two sisters, Bernice Zimmermann and her husband Wilbert, and Eileen Kleiboecker; a brother-in-law, Ralph Karmeier; and a son-in-law, Aaron Haege.

Funeral services will be held from the Immanuel Lutheran Church in Okawville on Friday, November 5, 2021 at 11 A.M. with Pastor Eric Wood officiating. Interment will be in the church cemetery. Military graveside rites will be accorded by American Legion Post #233 of Okawville.

Friends may call at the Campagna Funeral Home in Okawville on Thursday from 5 P.M. until 8 P.M. and then at the church on Friday from 9 A.M. until the time of the service.