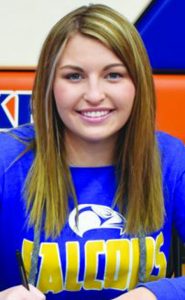 The team won four games and lost one  in a Junior College Invitational in Jonesboro, Arkansas Friday and Saturday.

Sawicki had a walk-off single to win the final game.

SIC finished the fall season with a 9-2 record.

For the season Shaye had a .500 batting average with 4 RBI’s and 2 run scored. She played third base and also a little right field.

SIC will open the spring season February 12 at Dyersburg State College in Tennessee.