The Okawville Lady Rockets began a long week of volleyball by clinching a Cahokia Conference title with a gritty road victory at Wesclin 22-25, 25-23, 25-22. The team was behind 16-10 in the third set but finished with a 15-6 run to win the match. 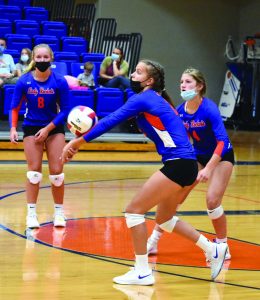 The Lady Rockets improved to 8-0 in the conference and held a three-game lead with two to play, claiming the title in their first year in the Cahokia Conference.

Many players had big games during the long three set match. Sydney Tebbe had 15 kills, 15 digs and six blocks. Megan Rennegarbe had 30 digs, and Madi Wienstroer had 25 digs. Zoe Todd had 19 assists, and Elli Kremmer had 17 assists. Maci Wolf had twelve kills, and Jordyn Heckert had nine kills.

The Lady Rockets had the inevitable letdown the next night after the big conference win but still defeated Lebanon 25-20, 18-25, 25-9.

The team then won another road conference game at Sparta with a close 26-24, 25-23 win. The Lady Rockets fell behind in each set but rallied for the victory, including winning the final six points of the first set.    Tebbe had seven kills, twelve digs and three blocks. Todd had 13 assists and nine points on serve. Kremmer had twelve assists and six points on serve. Wolf had nine kills and two blocks. Rennegarbe had 17 digs and three kills. Wienstroer had ten digs and three kills.