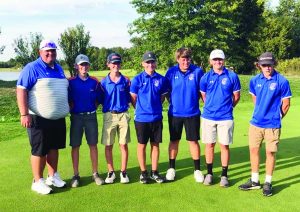 The Okawville Rockets golf team earned a spot in the McLeansboro Sectional with a third place finish at last Wednesday’s regional meet.

Okawville’s score of 348 was enough to advance out of the Gibault Regional held at Acorns Golf Links in Waterloo.

It was a team effort, with three Rockets finishing within one stroke of one another. Dillion Teter and Levi Traub had matching rounds of 85, and Dylan Clark was right there with his score of 86.

Just off their pace was Ashton McGranahan, who shot 92 to round out the Rockets’ scorecard.

The top three teams punched their tickets to the next round. Nashville won the regional trophy with a score of 324, and host school Gibualt finished second with a 334.

Okawville’s season came to an end at the McLeansboro Sectional Monday.

The Rockets put together a team score of 344, which put them in tenth place at the event.

The top four Rockets had final scores within a few strokes of one another. Clark led the way with an 84, Traub shot 85, Klasing fired an 87 and Teter finished with an 88.