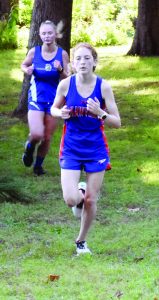 It was a busy week for Okawville’s cross country team, as the harriers competed in meets at Sparta, DuQuoin and Nashville.

Okawville started the busy week last Tuesday at Sparta, where both the Rockets and Lady Rockets finished third overall.

Grant Schleifer had the best overall finish at second overall, and Chloe Tepe and Lydia Luechtefeld finished in the top ten in the girls race.

Schleifer ran the course in 16:28, beating 45 of the 47 competitors at Sparta. As a team, the Rockets finished third out of five.