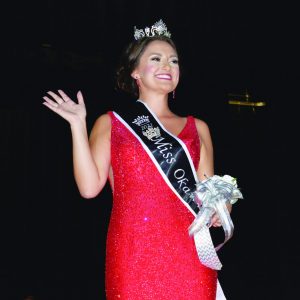 Marlee Frederking was crowned 2021 Okawville Fair Queen. She is the daughter of Mike and Jill Frederking of rural Addieville.

The pageant, emceed by Jim Hettenhausen, was held Friday evening at the Okawville School. The event began with a moment of silence in honor of the Pageant Crew member, Keith Wienstroer, who died in the past year.

Queen Marlee is a sophomore at Missouri State University in Springfield, pursuing a career in the Exercise and Movement Science Program. She plans to attend occupational therapy school to pursue a career as a pediatric Occupational Therapist.