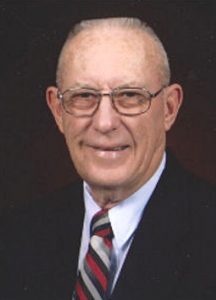 Bob was born November 4, 1932, in Kansas City, MO to William O. and Bulah A. (Shehorn) Briles. He grew up in the Alton, MO, area and attended country schools his first three years. In the fourth grade his family moved to Madison, IL, where he attended grade and high schools. He graduated from Madison High School in 1950 and worked for the Terminal Railroad for two years. He joined the U.S. Air Force and was stationed at Kirknewton Air Force Base in Edinburg, Scotland for three years in security work.

In 1956 he used the G.I. Bill to attend college, the first in his family ever to go to college and graduated from Eastern Illinois University in 1960 with a bachelor’s degree in social studies. He received his Master’s Degree in 1968 from SIU Carbondale. He married Kathleen (Katy) Ferree on August 7, 1960 at Mattoon and both worked as teachers. Bob spent his entire education career at Nashville Community High School from 1960 to 1990, the first decade as social studies teacher and part-time principal and the last two decades as principal. He was a member of First Baptist Church in Nashville.

He loved his family and was a lifelong fisherman and sports enthusiast, both as a participant and observer. He and Katy loved traveling and visited all 50 states, enjoyed numerous cruises, and toured many European countries and Canadian provinces. After retirement he enjoyed golfing, reading, and watching sports of all kinds, especially European soccer. He played slow pitch into his 40’s with the Nashville Savings and Loan team, the Black Knights, under the sponsorship of Don Meinert. He loved a good joke and storytelling, and he regularly visited the coffee group at Hardee’s for many years.

He leaves to mourn Katy, his wife of 61 years, his sons Randy and wife Andrea, Kent and wife Karen, and daughter Shelly, four grandsons and three step-grandchildren, and a host of friends.

He was preceded in death by his parents, his brother Boyd, and his nephew.

Per the wishes of Bob and his family, cremation will be performed and there will be a private family service and burial at the Old St. Ann Cemetery in Nashville, IL. Campagna Funeral Home is assisting the family with arrangements.

Should friends desire, memorials can be made to a charity of the donor’s choice or towards trees that will be planted in his memory and will be accepted by the Campagna Funeral Home.