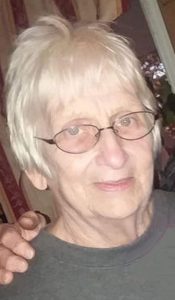 Mrs. Linda L. Hawkins of Ashley, IL departed this life at Washington County Hospital in Nashville, IL on Tuesday, September 7, 2021 at 7:47 AM. She had attained the age of 79 years, 4 months and 10 days.

Mrs. Hawkins was born on April 27, 1942 at Richview, IL the daughter of William and Nina (Hamilton) McCoy. She was united in marriage to Don Hawkins on September 9, 1961 in Nashville, IL and he survives her passing.

Linda cleaned the Ashley Grade School in Ashley, IL for many years and later worked as a packer for the Swan Corporation in Centralia, IL. She was a member of the Ashley Methodist Church in Ashley, IL. Linda was a gardening enthusiast, enjoyed going to yard sales and most of all she loved her pets.

She was preceded in death by her parents, son, Roger Hawkins and two brothers, Bill and Larry McCoy.

Funeral services will be held at the Campagna Funeral Home in Ashley, IL on Monday, September 13, 2021 at 11 AM. Burial will follow in the Ashley City Cemetery.

Friends may call at the Campagna Funeral Home in Ashley, IL on Monday from 9 AM until the service hour.

Should friends desire, memorials can be made to the Washington County Animal Shelter and will be accepted by the Campagna Funeral Home.