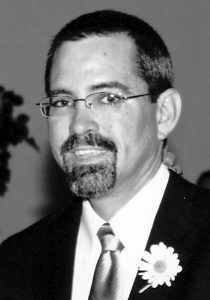 Chad was born in Mt. Carmel, IL on March 30, 1969 the son of Robert and Patsy (nee Funkhouser) Ragsdale. He was united in marriage to Karla Stine in Addieville, IL on July 7, 2007 and she survives his passing.

Mr. Ragsdale worked as a coal mine technician at the Prairie State Generating Campus in rural Washington County, IL. Prior to that, he had worked at Gary’s Tire Center in Okawville for 20 years. Chad was a graduate of Okawville High School. He was a member of the First Baptist Church of Okawville until the churches closing. He was an avid outdoorsman and enjoyed hunting, fishing, trap shooting, taking target practice and searching for mushrooms. Chad was also a car enthusiast. He loved building them, working on them, and driving them. He enjoyed listening to music and especially loved going to see his favorite bands play live. Chad was a proud member of N.A.M.I. (The National Alliance for the Mentally Ill)

Funeral services will be held from the Campagna Funeral Home in Okawville on Sunday, September 12, 2021 at 4 P.M. with Pastor Jeffrey Schwab officiating. Following the service, cremation will be performed. Graveside services with interment of ashes will be held in the Oak Grove Cemetery in Grayville, IL on Wednesday, September 15, 2021 at 11 A.M. Family and friends are asked to go directly to the cemetery.

Friends may call at the Campagna Funeral Home in Okawville on Sunday, September 12, 2021 from 1 P.M. until the time of the service.

In lieu of flowers, memorials may be made to N.A.M.I. (National Alliance for the Mentally Ill) or to provide scholarships to kids at a church summer camp of the donor’s choice and will be accepted by the Campagna Funeral Home.