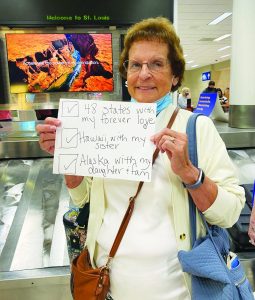 Janet Wulf of Addieville has accomplished something not many people get to in their lives by visiting all 50 states.

Over the course of many years, she and her late husband, Delmar, drove to 48 of them. Four years ago, she went to Hawaii with her sister, Carol Rolves, and niece, Christine.

Janet recently returned from a week-long trip to Alaska, which was the final state on her list. She went with her daughter, Karla and Doug Dingwerth and Emmerson and Bennett of Fairview, Texas.

While in Alaska, the group of travelers spent time in Denali where they enjoyed a jeep tour of the Old Denali Highway. They also drove into Denali National Park and were able to see the top of the mountain, which only 30 percent of the people are fortunate enough to view.

The other part of their trip they enjoyed staying at Alyeska Resort in Girdwood. While there they hiked to a waterfall, went on a 26 Glacier Fjord Tour from Whittier, drove Highway 1 to Seward along the Kenai Peninsula and enjoyed dinner on their final night at the top of the Alyeska Mountain.

In addition to those travels, the group also had lunch with Janet’s nephew, Brad Schuetz, who lives in Anchorage before returning back to Dallas.