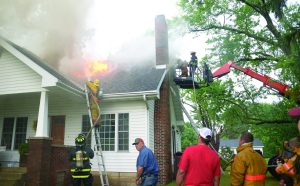 Storms moving through the area last week did some damage, as lightning caused a fire at an Okawville home.

Okawville fire chief Jim Rossell said the fire at the home of Dennis and Debbie Maschhoff on Staude Street in Okawville was the result of lightning striking a utility pole  near the house Friday afternoon.

The home was heavily damaged in the resulting fire. The blaze was contained mostly in the upstairs area, but the house suffered water damage throughout.

Rossel said that his department was on scene for approximately four hours. Firefighters from Addieville and Nashville were also on hand to battle the blaze.

The community responded with help for the local residents. After the fire was extinguished, family, friends and neighbors helped with efforts to clean out the home and salvage belongings.