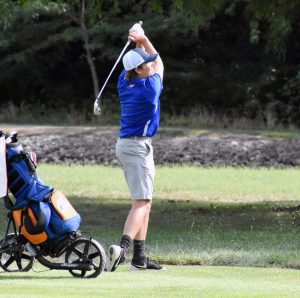 Golfers from around the area were at Roland Barkau Memorial Golf Course Saturday for the Okawville Invitational, where the host Rockets finished third in the field of nine teams

Okawville’s team score of 344 was 35 strokes off the winning score from the Nashville Hornets. Steeleville finished second with a 316.

Levi Traub broke 80 in the 18-hole event, shooting 78 for the Rockets’ low score. Dillon Teter shot 84, and the rest of the scores were within a couple of strokes of one another.

Shane Klasing shot 90 and Riley Clark carded a 92 to round out Okawville’s top four scores.

The Rockets’ other two competitors were just off the pace of their teammates, as Parker Wiese shot 94 and Parker Lehde finished his day with a round of 96.