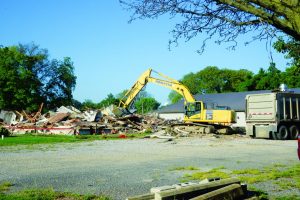 The demolition of the old Okawville American Legion building Wednesday cleared the way for enhancing the entrance of the new building.

The east side of the new Legion will be landscaped and paved with etched bricks purchased in honor of others.

For now, the Legion is accessible through the south entrance.

The old Legion was one of the oldest buildings in Okawville. Its demise started in early 2019 with rafter/roof structural problems. Because of the age and general condition of the building, Legion members decided that constructing a new building was a better alternative than trying to  rebuild the old one.