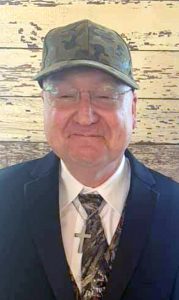 A St. Libory man working as a security guard was shot and killed during a deadly bank robbery Friday in East St. Louis.

Ted Horn, 56, of St. Libory, a bank guard at First Bank in East St. Louis, was shot and killed while trying to stop two men from robbing the bank, according to a press release from United States Attorney’s Office in the Southern District of Illinois.

The federal complaint alleges that two masked men entered the First Bank location at approximately 4 p.m. on Friday. One of the men handed a note to a teller that read, “I got a bomb strapped to my chest put all the money in or everyone die.”

The teller complied with the demand and handed the men some money, and they turned away from the counter and headed for the door.

Horn, working as a uniformed security guard, attempted to intercept the two men. One of the men pushed past Horn and ran out of the bank. The second man drew a semi-automatic handgun and shot Horn in the head. The robbers then fled in a white Lexus sedan, and Horn was pronounced dead at the scene.