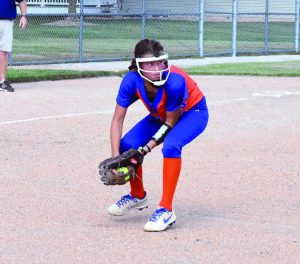 The Okawville Junior High Lady Rockets sandwiched a couple of tough losses around their first win of the young softball season.

Okawville opened the season with a tough 5-3 loss to Pinckneyville at home last Tuesday.

Despite outhitting their guests, the Lady Rockets lost when Pinckneyville scored twice in the top of the seventh inning to notch the win.

After falling behind, Okawville clawed back in the game to tie the score 3-3 in the sixth inning on a double by Brynn Rhodes.

Kenley Hackstadt started the game for Okawville and went five innings, allowing three runs on three hits and striking out nine. Schae Juenger came on to throw two innings in relief out of the bullpen.

Rhodes and Addi Hasheider drove in the Lady Rockets’ runs.