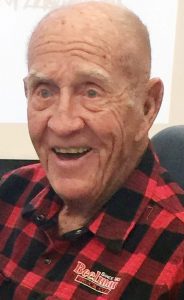 Frank was CEO of Beelman Truck Company, and until Covid, went to work every day. He guided the company with exceptional integrity and ethics and under his leadership, he built multiple businesses serving thousands of customers in approximately 30 states. Frank was a role model for many throughout his life and an incredible family man. He was a legend in the trucking industry and loved riding Harleys for 86 years.

In his earlier years, he loved camping and boating. Frank was a great storyteller with an amazing memory. Until his final days, he spent many hours riding his Harley. Frank was an Army veteran of WW II where he fought at Omaha Beach on D-Day and in the Battle of the Bulge. Frank was one of the last living survivors of two of the bloodiest battles in WW II. He was a 75-year member of the St. Libory American Legion, past commander and he was instrumental in building the St. Libory American Legion Hall. He was a former member of Ainad Temple, East St. Louis and a member of various construction and trucking associations.

He is preceded in death by his parents, Frank and Elizabeth, nee Sommer, Beelman, Sr., wife, Kay Beelman, nee Bozsa, whom he married on July 1, 1943 and who died Dec. 4, 2010, a son, Daniel Beelman, two grandchildren, Michael Friederich and Drew Lintker and four sisters, Helen, Veronica, Beatrice and Marcella.

Funeral:  A funeral Mass will be held 10 AM Monday, Aug. 9, 2021 at St. Liborius Church with Father Paul Wienhoff and Father Dennis Voss concelebrating. Burial with military honors will follow in St. Liborius Cemetery.