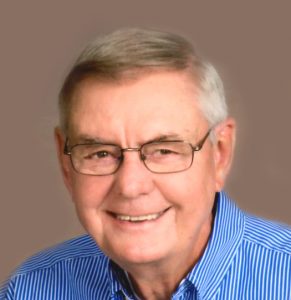 He was born January 17, 1941 in Centralia, a son of the late William and Emma, nee Langenhorst, Heimann.

In addition to his parents, he was preceded in death by a sister, Elizabeth “Betty” Wilke; brother, William Heimann; father-in-law and mother-in-law, Alvin and Clara, nee Sandheinrich, Schmidt; and sisters-in-law and brothers-in-law, Jean Heimann, and Pat and David Huegen.

Virgil graduated in 1959 from Aviston Community High School where he was active in the FFA and even achieved the State Famer Degree.  After high school, he studied Traffic Management at Humbold Institute in Minnesota.  He then began working as a Production Scheduler at Weyerhaeuser Company in Belleville, where he worked for 40 years and retired in 2000.  Virgil truly enjoyed his 20 years of retirement.

He was a member of St. Bernard Catholic Church in Albers where he was a past president of the parish council, past president of the Albers Commercial Club, co-chairman of the 1991 Albers Centennial, was one of the co-founding officers of the Central Community High School PAWS Association, Clinton County Democrats, Greasy Fingers Two Cylinder Club, International Harvester Collectors World Wide, IHC Chapter-32 Illinois, and American Farm Heritage Museum NFP, Greenville.

Virgil loved playing pinochle, euchre, ping pong, and volleyball, and his greatest love was collecting RED tractors.  His pride and joy were his 1953 Super M and1955 International 300, and his room full of toy RED tractors.  He and his wife Janet enjoyed traveling and visited all 50 states, but above all, he enjoyed going to all the grandkids events when they were in school and now found great joy playing with his great-grandchildren.

In lieu of flowers, plants, and other gifts, memorials may be made to the American Farm Heritage Museum NFP, Greenville, Central Community High School PAWS Association, or to St. Bernard’s Catholic Church in the form of masses and will be received at the funeral home.

Expressions of sympathy can be sent to the family at www.mossfuneralhome.com