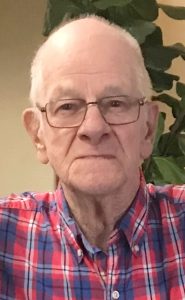 Bill proudly served with the United States Army. He worked as a loan officer and was Vice President at the Ashley State Bank in Ashley, IL, until his retirement. Though banking was his profession, farming was his passion. He was of the Methodist faith and was a member of the American Legion Post 110, Ashley Lions Club, Investment Club and served on the Ashley Grade School Board, Ashley Township Board and the Washington County Board. Bill was an avid hunter, and he loved gardening and collecting coins and guns. He was so proud of his grandchildren and loved them dearly.

He was preceded in death by his wife, parents, 2 brothers; Earl Evans Jr. and Harold Evans and sister, Dorothy Shook.

Funeral services will be held at the Campagna Funeral Home in Ashley, IL on Saturday, June 5, 2021 at 12 P.M. with Rev. Bill Bunnage officiating. Interment will follow in the Masonic Cemetery in Nashville, IL. Military graveside rites will be accorded by the American Legion Post 110.

Friends may call at the Campagna Funeral Home in Ashley on Saturday from 9 A.M. until the service hour.

Should friends desire, memorials may be made to the Ashley Library or to a charity of the donor’s choice and will be accepted by the Campagna Funeral Home.