The Okawville Lady Rockets volleyball team dropped two of three matches this past week, losing to both Chester and Red Bud while defeating Christ Our Rock. 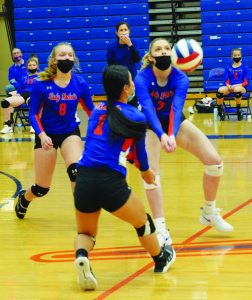 The freshmen team won a close second set to prevail in their eighth match in a row with a 25-12, 28-26 win. Kylie Going had eight assists and 13 points on serve. Raelyn Obemeier had 14 digs, two kills, and eight points on serve. Addy Wiechert had six kills. Lexy Borrenpohl had 14 digs.

Read details from all the games in this week’s issue.