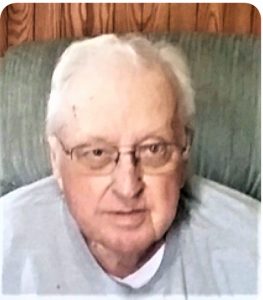 Herbert Sigman of rural Nashville, IL departed this life in the Extended Care unit of the Washington County Hospital in Nashville on Friday, April 9, 2021 at 11:30 A.M. He had attained the age of 87 years, 11 months, and 9 days.

Herbert was born in Glenallen, MO on April 30, 1933 the son of Thomas and Leora (nee Shelton) Sigman. He was united in marriage to Gloria Jean Gramm in the St. John United Church of Christ in Mascoutah, IL on June 14, 1959 and she preceded him in death on July 21, 2018.

Mr. Sigman served in the United States Army, stationed at Ft. Knox, KY where he served as a military cook.  With Herb being such a great cook, he would often “correct” Gloria on her cooking skills and recently he had been advising his girls on the art of frying an egg.

He previously worked at the Modern Foundry in Mascoutah, IL and later for Lester Campbell at the Nashville Memorial Co. Herb was also a long-time grain farmer as well as raising beef cattle and feeder pigs. Herb loved farming and was active on the grain farm into his 80’s.

He was a faithful member of the St. John United Church of Christ in Plum Hill and had served on the church council. He was active in the men’s Brotherhood and played on their dartball team. Herb also served the church as custodian for several years.

Mr. Sigman was a member of the Washington County Farm Bureau and the Addieville Community Club. He was also proud of the fact that he was a blood donor having donated over 50 pints of blood through the years. Herb enjoyed reading the newspaper to keep up with current events. Everyone who knew Herb can attest to the fact that he was quite the conversationalist. He loved talking to family and friends about farming, the weather, or what was happening in the area.

Funeral services will be held from the St. John United Church of Christ in Plum Hill, IL on Thursday, April 15, 2021 at 10:00 A.M. with Pastor Don Jones officiating. Interment will be in the church cemetery. For those unable to attend, the service can be viewed live on the Campagna Funeral Home Facebook page.

Due to Covid-19 health concerns, restrictions will be followed. Face coverings will be required, and social distancing measures will be implemented, with a limited number of visitors in the church at any one time. Please be respectful of time so other visitors may pay their respects to the family.

In lieu of flowers, memorials may be made to the St. John Cemetery at Plum Hill or to the Okawville Senior Center and will be accepted by the Campagna Funeral Home.