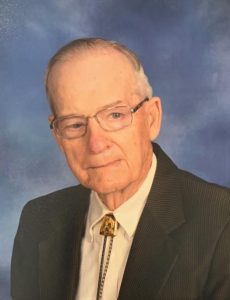 Milburn Moeller of Addieville, IL departed this life in Integrity Healthcare in Smithton, IL on Saturday, April 10, 2021 at 5:06 P.M. He had attained the age of 91 years, 5 months, and 9 days.

Milburn was born in Nashville, IL on October 31, 1929 the son of Walter and Adela (nee Wulf) Moeller. He was united in marriage to Arlene Moeller in the Zion United Church of Christ in Addieville on July 30, 1949 and she preceded him in death on April 6, 2002.

Mr. Moeller worked as a lineman for L & N Railroad and later worked at the Prairie Farms Dairy in Nashville until his retirement. He was a faithful member of the Zion United Church of Christ in Addieville. Milburn served as a volunteer firefighter with the Addieville Fire Department for 25 years until retiring. During that time, he served as a Captain and five years as Assistant Fire Chief. He enjoyed bowling and bowled league in both Nashville and Carlyle. Milburn dearly loved his faithful dog, Pug.

In addition to his parents and wife, he was preceded in death by three brothers, Lawrence, Norman, and Vernon Moeller; and a sister, Linda Lou Bury.

Funeral services will be held from the Campagna Funeral Home in Okawville on Friday, April 16, 2021 at 11 A.M. with Rev. Bruce Moeller officiating. Interment will be in the Zion Cemetery in Addieville.

Friends may call at the Campagna Funeral Home in Okawville on Friday from 9 A.M. until the service hour.

Due to Covid-19 health concerns, restrictions will be followed. Face coverings will be required, and social distancing measures will be implemented, with a limited number of visitors in the funeral home  at any one time. Please be respectful of time so other visitors may pay their respects to the family.

In lieu of flowers, memorials may be made to the Okawville Senior Center and will be accepted by the Campagna Funeral Home.