A traffic stop by the Nashville Police Department Sunday night resulted in three arrests of residents of southern Illinois for drug charges and outstanding warrants over the weekend.

The traffic stop of a vehicle with three occupants occurred in the early evening hours Saturday in the parking lot between El Indio and All Mart on South Mill Street.

According to the police report, officers noted that the male driver, Skylar Nolan of Buncombe, attempted to switch seats with passenger Hali Clutts of Tamms during the course of the stop, resulting in the police detaining all three occupants of the vehicle.

Full details of the arrest and charges in this week’s issue. 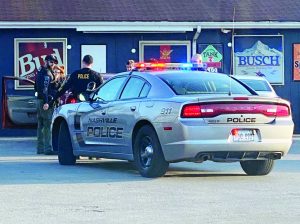