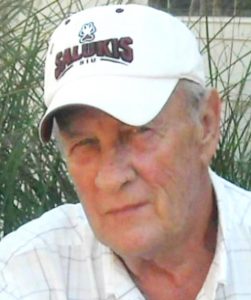 Donald was born in Summersville, MO on July 20, 1941 the son of Getta (nee Martin) Ernst and was raised by his maternal grandparents, John Wesley and Bertha Martin and later by his mother and step- father, Getta and Erwin Ernst. He was united in marriage to Cheryl Giovando (nee Modglin) in Belleville, IL on January 8, 1982 and she survives his passing.

Mr. Allen worked as a truck driver for many years. He proudly served in the United States Marine Corps. He enjoyed the outdoors and liked to go fishing and he also enjoyed cooking. Don was handy and he liked tinkering on most anything. He was also an avid reader, especially novels. Besides his family, music was Don’s great love. He loved playing the fiddle and guitar and was a huge fan of Chet Atkin, even adopting the Chet Atkins unique finger style of playing.

He was preceded in death by his mother and step-father, Getta and Erwin Ernst; grandparents; the mother of his children, Betty Allen (nee Prekup) who passed away on February 28, 1974; as well as several aunts and an uncle.

Friends may call at the Campagna Funeral Home in Okawville on Monday, March 22 from 5:00 P.M. until the time of the service.

Interment with full military honors will be in the Jefferson Barracks National Cemetery in St. Louis on Tuesday, March 23, 2021 at 11:00 A.M. Those wishing to attend the committal services are asked to arrive at the funeral home by 9:30 A.M. on Tuesday for the procession to the cemetery.

Due to Covid-19 health concerns, restrictions will be followed. Face coverings will be required, and social distancing measures will be implemented, with a limited number of visitors in the funeral home at any one time. Please be respectful of time so other visitors may pay their respects to the family.

In lieu of flowers, memorials may be made to the Raise the Roof fund at the American Legion Post 233 in Okawville and will be accepted by the Campagna Funeral Home.