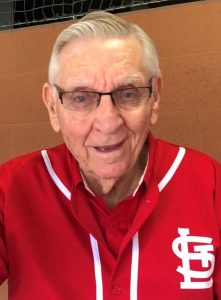 Merrill was born February 11, 1924 in Marissa, IL, the son of Oscar and Johanna (nee Heberer) Kirchhoefer. He was united in marriage to Marilyn Boeschen on May 26, 1946 at Zion United Church of Christ in Addieville, IL and she preceded him in death on June 2, 2018.

Merrill attended University of Illinois, served in World War 2 in a Communications Company. He was in the Battle of the Bulge. After the war he joined his father and in 1969 when Oscar passes he became co-owner of Kirchhoefer Motor Co until 1990. Merrill was active in community affairs serving on the Nashville Community High School Board and Fire Department Board. He was a member of the VFW, American Legion and Lions Club; serving in various leadership positions within those organizations. He was an active member of St Paul UCC in Nashville, most recently attended St Paul UCC in Foraville.

He was preceded in death by his parents, wife and sister Geraldine Boeschen.

A private funeral service will be held at Campagna Funeral Home in Nashville, IL on Tuesday, March 9, 2021 with Rev. Matthew Friz and Rev. Beverly Kahle officiating. Interment will follow in the St. Paul United Church of Christ Cemetery in Nashville, IL. Military graveside rites will be accorded by the American Legion Post 110.

Since this is a private funeral, those that would want to honor in Nashville, we suggest wearing their St. Louis Cardinals attire around Nashville on Tuesday since Merrill was a VERY AVID Fan.