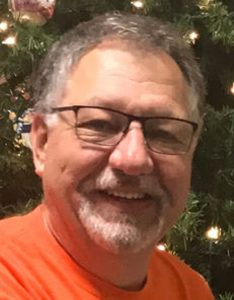 Mr. Gene Hackstadt of Nashville, IL departed this life in the SSM Good Samaritan Hospital in Mt. Vernon, IL on Wednesday, February 24, 2021 at 5:31 A.M. He had attained the age of 64 years and 5 days.

Gene was born in Belleville, IL on February 19, 1957 the son of Oscar and Mildred (nee Wernecke) Hackstadt. He was united in marriage to Amy Brown in the Grace United Methodist Church in Nashville on December 29, 1979 and she survives his passing.

Mr. Hackstadt worked as a biomedical electronic technician at St. Mary’s Hospital in Centralia, IL for 36 years until his retirement in December of 2017. Following retirement, he worked part-time at SIA Electronics in Tilden, IL until his passing. Gene was a faithful member of the Grace United Methodist Church in Nashville and had previously served as President of the Nashville Community Consolidated School District #49 school board.

Gene was a dedicated family man and took great pleasure from spending time with them. He loved spending time golfing and vacationing with his family. Gene enjoyed working crossword puzzles, going boating and fishing with his children and grandchildren, and he always looked forward to family game night.

He was preceded in death by his parents; a brother-in-law, Tobin Brown; as well as aunts, uncles, and cousins.

Private services for will be held from the Campagna Funeral Home in Nashville on Monday, March 1, 2021 with Rev. Mary Alice Cunningham officiating. Interment will be in the Greenwood Cemetery in Nashville.

In lieu of flowers, memorials may be made to the Downs Syndrome Association of Greater St. Louis or to the Grace United Methodist Church and will be accepted by the Campagna Funeral Home.