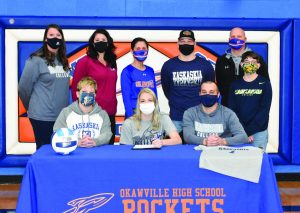 If the mark of a good prep volleyball program is sending players to compete at the college level, Okawville’s team is coming into its own.

For Auer, joining a college program is the next step in her career, and for Okawville High School, it’s a mark of how far the program has come since it starting competing at the varsity level in 2016.

“I’ve been playing volleyball since junior high, and I love playing against good competition,” Auer said. “Now I can do it in college.”

Auer has the pedigree. She grew up playing in the volleyball hotbed of Clinton County before moving to Okawville from Aviston her eighth grade year.

She has been a part of the development of the program at Okawville, which is fairly new as programs go. Auer was in jnior high when the Lady Rockets first started playing varsity matches.

“I like the atmosphere that we have here now, and volleyball is my favorite sport,” Auer said. “I love the energy of the game.”