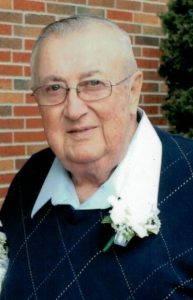 Robert L. Thorson, 87 of Hoyleton, passed away at 12:38 a.m. on Monday, January 18, 2021 at St. Elizabeth’s Hospital in O’Fallon. He was born on November 25, 1933 in Alexandria, MN, the son of Art and Margaret Beltz Thorson and was raised by his grandparents Ferdinand and Anna Beltz. He married LaVerne Smith on January 21, 1956 in Clarksville, TN. Besides his wife of 65 years, left to mourn his passing are 3 sons; Clint (Angie) Thorson of Carlyle, David (Jeanene Moon) Thorson and Joel (Brenda Yarnell) Thorson both of Nashville. A brother Dennis Thorson of Augusta, GA. 2 sisters; JoAnn (Gerry) Feld of Sauk Rapids, MN and Jeanie (Barb Welle) Thorson of St. Cloud, MN. 11 grandchildren; Corey and Shanea Thorson, Ali and Nicki Brummet, Connor and Jamie Murray, Amanda, Cora, Daniel and Shelby Thorson and Jake Yarnell. 18 great grandchildren and several nieces and nephews including a special niece Michelle Thorson. He was preceded in death by his parents, a brother Gerald Thorson, In Laws; Buster and Rena Smith, Sister in Law Joan Thorson and 2 nephews; Mark and Mike Thorson.

Mr. Thorson joined the Army National Guard in 1953 and then became a veteran of the United States Army serving in the 11th Airborne. He retired as a foreman with the Monterey Coal Company #2 mine in Albers. Robert was an avid Cardinals fan and loved the Nashville Hornets. His love of hunting and fishing came from being raised in Minnesota, the land of 10,000 lakes. He spent many hours gardening and tending to his tomatoes. Most of all, he enjoyed spending time with friends and family. He was extremely proud of his grandkids and loved to talk about them.

Funeral services will be held at 11:00 a.m. on Monday, January 25, 2021 at Trinity Lutheran Church in Hoyleton with Rev. Nathan Wollenberg officiating. Burial will follow in the church cemetery with military rites accorded by the Nashville American Legion Post #110. Friends may call from 3:00 to 6:00 p.m. on Sunday and 7:30 to 8:30 a.m. on Monday at the Styninger Funeral Home in Nashville and one hour prior to services at the church. Memorial contributions may be made to NCHS Sports Boosters or Hoyleton Trinity Lutheran Church. Online expressions of sympathy may be made at www.styningerfuneralhomes.com or on the funeral home’s Facebook page.