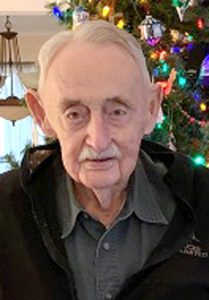 He was a WW2 Navy veteran serving on the USS Tortuga, affectionately known by her crew as “The Galloping Ghost of the Pacific Coast”. He joined the Laborers’ Union in 1944 where he worked on many construction sites. He also spent 25 years as the Local Business Agent until his retirement in 1988. Donald was the Founder of the Donald Hagan Goose Club of Southern Illinois, also a member of the Illinois Nut Tree Association, VFW Post 7710 in New Athens, Laborer’s International Union of America, Local 1303 and 459, the 76er’s Club and Darmstadt Community Club.

He was an avid hunter, fisherman and trapper. Donald took great pride in supplying his family and friends with vegetables from his garden. He enjoyed grafting fruit and nut trees, particularly pecan trees. Donald and his wife Jacqueline enjoyed traveling with the Senior Group.

Mr. Hagan was preceded in death by his parents; Robert Lee and Allie Meade (Wells) Hagan and his brother Albert Wayne Hagan.

In lieu of flowers, memorials are appreciated at St. Jude Children’s Hospital at St. Jude.org.

Condolences to the family may be expressed online at www.heilschuesssler.com.

Funeral services are limited to immediate family members due to COVID-19 restrictions.

Heil-Schuessler Funeral Home in New Athens is in charge of arrangements.