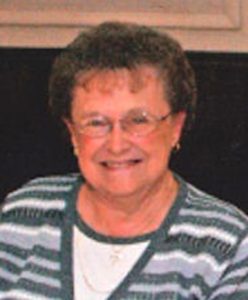 Mrs. Minnette Guetersloh of Nashville, IL departed this life at SSM Health Good Samaritan Hospital in Mt. Vernon, IL on Wednesday, December 30, 2020 at 4:25 P.M.  She had attained the age of 83 years, 1 month and 6 days.

Minnette was born on November 24, 1937 in Irvington, IL, the daughter of Gustav and Addie (Tiemann) Cramer.  She was united in marriage to Elroy Guetersloh on August 24, 1958 in Hoyleton, IL and he preceded her in death on December 31, 1972.

She was preceded in death by her parents, husband and daughter, Lisa Strubhart.

Due to Covid 19 health concerns, a private funeral service will be held at the Campagna Funeral Home in Nashville, IL on Saturday, January 2, 2020 with Rev. James Miller officiating.  Interment will follow in the Trinity Lutheran Cemetery in Nashville, IL.

Should friends desire, memorials can be made to the Trinity Lutheran Ladies Aid and will be accepted by the Campagna Funeral Home, who is assisting the family with arrangements.