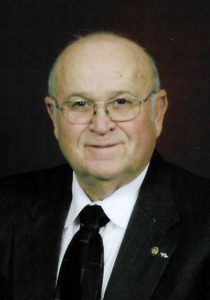 Gerald was born February 23, 1935 in Irvington, the son of Roy Lester Armstrong and Opal (Baldridge) Armstrong. He married Patricia Badgett on March 17, 1956 at the New Harmony Baptist Church in Centralia and she survives him in Irvington.

In addition to his wife Patricia of 64 years, he is survived by two daughters: Gera Lynne Sims and husband Martin of Irvington, and Lori Ann Reeter and husband Tim of Edwardsville; two grandchildren: Cole Armstrong Strohmeier of Columbus, GA and FiancÃ© Emily Dearman of Houston, TX, and Caleb Anthony Strohmeier of Edwardsville; one sister of Irvington; several great nieces; and a lot of loving friends.

Gerald was preceded in death by his parents: Roy Lester and Opal Armstrong; father and mother-in-law: Angus and Emma Badgett.

He studied at Southern Illinois University, Carbondale, served in the United States Army and was stationed in Ft. Leonard Wood, MO.

Gerald was a 3rd generation farmer. Armstrong Farms had peach and apple orchards, strawberry fields and a grain farm. Gerald began Armstrong Trucking, hauling cattle for many years. He was also a Representative for Pioneer Seed, Micogen Seed and Chem-Farm Implements. Gerald was co-owner of the first Subaru dealership in Southern Illinois based out of Columbus, OH.

One of Gerald’s biggest passions was being a Shriner. He became a Mason in 1982, belonged to the Scottish Rite Bodies Valley-Southern Illinois and Night Commander of the Court of Honor Scottish Rite, Ainad Temple and earned his 32nd Degree MSA, Jefferson County Shrine Club, Jefferson County Krazy Klowns, and the Royal Order Court of Jesters *86. Gerald was an Aid for many years to the Shriner Potentates and was Personal Aid in 2012.

Above all, Gerald’s wife and family were his greatest loves. He and Pat enjoyed traveling and his favorite place was Hawaii. Spending time with family and “Everyone being Together” was what he wanted most. He could be found at many sporting events supporting Cole and Caleb who were his pride and joys.

A visitation for Gerald Roy Armstrong will be held on Tuesday, December 29, 2020 from 3:00 p.m. to 6:00 p.m. and on Wednesday, December 30, 2020 from 1:00 p.m. till 2:00 p.m. at the Sutherland-Garnier Funeral Home in Centralia. Due to local health mitigations, a limit of 10 people are allowed into the Funeral Home at a time, masks must be worn, and social distancing will be observed. A Private Family Service will be held Wednesday, December 30, 2020 at 2:00 PM at the Sutherland-Garnier Funeral Home in Centralia. The service will be live broadcasted for family and friends, which can be accessed by going to www.sutherlandfuneralhome.com website and clicking on Gerald’s Tribute then clicking live webcasting. If you have trouble, please feel free to call our office and we will be there to assist you. Burial will follow in Hillcrest Memorial Park in Centralia. In honor of Gerald, memorial donations may be made to the Irvington Volunteer Fire Department or to the St. Louis Shriners Children’s Hospital and will be accepted by the Sutherland-Garnier Funeral Home at 235 North Sycamore Street in Centralia, IL 62801 (618) 532-3523, who is honored to be of service to the Armstrong family. Online condolences may be made to the family by visiting www.sutherlandfuneralhome.com or the Funeral Home’s Facebook page.