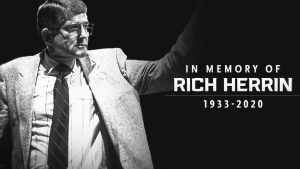 A legendary basketball coach who started his career at Okawville High decades ago has died.

Rich Herrin, of Carterville, died Friday, December 25 at the age of 87.

The Bridgeport native and McKendree College athlete and  graduate and his wife Sue came to Okawville in 1956 for his first teaching and coaching position.

He compiled a 95-17 record in his four years at Okawville.

Among those on his team were underclassmen Stan and Dave Luechtefeld and Herb Dingwerth. The Luechtefeld’s father, Sidney, had informed the coach that his sons would not be able to play because they had to help on the family dairy farm. Sidney had tuberculosis, so the brothers were needed to milk cows and other chores.

Herrin worked out an arrangement with Luechtefeld so that he would agree to let his sons play basketball. They would only have practice for an hour after school.  On game nights, the brothers could have a late arrival after the junior varsity game had started.

From Okawville Herrin moved to Benton to 1960 for the head coaching position.

Read the full story of his career and life in this week’s issue.