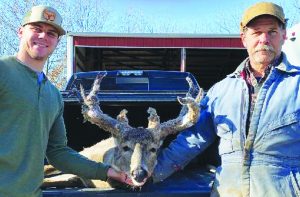 A rare cactus buck said to be in the woods around DuBois was almost a legend. People claiming to see it tried to convince others there that yes, there was such an animal in the county. Others who had never seen the deer were doubters.

The cactus buck had a larger than life presence, almost like the Loch Ness Monster of Scotland or Bigfoot of the Pacific Northwest.

One shot from a hunter last weekend proved that there was indeed a cactus buck near DuBois.

Creo Van Belenger of Green Bay, Wisconsin killed the deer with abnormal antler growth. The buck had only one testicle,  so it did not have sufficient testosterone to shed its antlers yearly. The velvety antlers still were a living membrane, with scabs and scars. The base of the antlers was 9 1/2 inches, compared to 4 inches on a normal large buck.

The buck, estimated to be 8-10 years old, weighed about 280 pounds and was approximately 20 points.

Read more in this week’s issue.