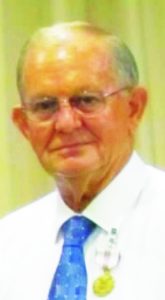 Kenneth was born in Birdseye, IN on August 8, 1947 the son of Byron and Florence (nee Cummins) Hevner. He was united in marriage to Judy Goffinet in the St. Isodore Catholic Church in Bristow, IN on June 15, 1974 and she survives his passing.

Mr. Hevner was a veteran of the United States Army. He received his bachelor’s degree in Engineering from Purdue University in 1970. From 1984 till 1987, he worked as a GS-12 design civil engineer at Scott Air Force Base. From 1987 till 1998, he worked at MAC as a GS-13 command pavement and in MILCOM project management. From 2000 until his retirement in June of 2013, he was the GS-14 infrastructure branch chief. During this period, he was assigned as the GS-15 Operations Division Chief. Kenneth was a member of the St. Barbara Catholic Church in Okawville. He was also a member of American Legion Post 233 and VFW Post 5596 of Okawville, and a member of the Okawville Community Club. Ken enjoyed collecting antique Case tractors and antique tools, and especially loved spending time with his family.

In addition to his parents, he was preceded in death by two brothers, Leon Chanley and a brother in infancy.

In accordance with the wishes of Kenneth and his family, cremation was performed.

Visitation will be held from the Campagna Funeral Home in Okawville on Friday, December 4, 2020 from 5 P.M. until 7 P.M. Due to Covid-19 health concerns, visitors should practice social distancing and the wearing of masks is encouraged.

A private memorial service will be held following the visitation. Military rites will be accorded by American Legion Post 233 of Okawville.

In lieu of flowers, memorials may be made to the Raise the Roof fund at the Okawville American Legion and will be accepted by the Campagna Funeral Home.