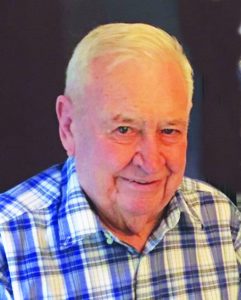 Edward was born at home in Okawville on June 26, 1924 the son of Edwin and Augusta (nee Oelze) Holtgrewe. He was united in marriage to Ruth Joellenbeck in the St. Paul United Church of Christ (White Church) in rural Okawville on August 26, 1956 and she preceded him in death on October 19, 2019.

Mr. Holtgrewe served with the United States Army during WW II. He worked as a cabinet maker and carpenter with the Krohne’s until his retirement in 1986 and was a member of the Carpenter’s Local 480 in Freeburg, IL Following his retirement, Eddie did maintenance work for Hospice of Southern Illinois at their office in Belleville, IL. Edward was a dedicated and faithful member of the St. Paul United Church of Christ in rural Okawville where he had held numerous offices and served on several church committees. He was also a member of the Okawville Community Club and the Heritage House Museum Association in Okawville. Eddie enjoyed fishing and woodworking, and he loved farming. Being on the tractor was his “happy place.” He especially loved spending time with his grandkids and was so proud of them.

In accordance with the wishes of Edward and his family, cremation was performed.

A private memorial service will be held at White Church in Okawville with Pastor Jeffrey Schwab officiating. Interment of ashes will be in the church cemetery. Military graveside rites will be accorded by American Legion Post 233 of Okawville.

In lieu of flowers, memorials may be made to the St. Paul (White Church) Cemetery or to Hospice of Southern Illinois and will be accepted by the Campagna Funeral Home.