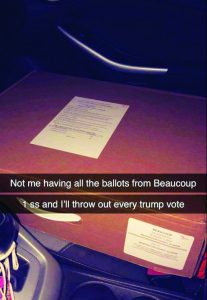 A local election judge was interviewed by law enforcement after her social media post about throwing out ballots caught the attention of Washington County authorities.

The Election Night post, which was a photo of a sealed box of ballots from the Beaucoup precinct, included a message threatening to “throw out every trump (sic) vote.”

Washington County Sheriff Len Campbell said that his office began in investigation after the post from the 17-year-old election judge in Beaucoup  Township began circulating on social media.

Campbell contacted County Clerk Nancy Heseman, who reported that the ballots were delivered intact with no damage done to the sealed box or the ballots within.