Mrs. Marilyn Clare (Nikrant) Frese of rural Ashley, IL, departed this life at Washington County Hospital-Extended Care in Nashville, IL on Monday, November 9, 2020 at 9 PM.  She had attained the age of 90 years, 11 months and 20 days. 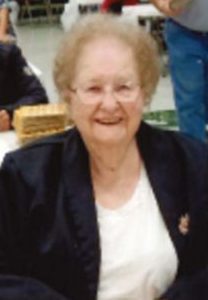 Marilyn worked as the Washington County Deputy Clerk from June 1966 until her retirement and later worked for the Washington County Judicial Court until 1997.   She was a faithful member of St. Ann’s Catholic Church in Nashville, IL, where she was active with the Alter Sodality since 1969.  Marilyn was a member and served as secretary of the Belleville Dioceson Council of Catholic Women (BDCCW), where she also served as president from 1992-1994 and 2002-2004. She also served as a volunteer secretary for many years at St. Ann Catholic School.  Marilyn loved being with her family and she enjoyed traveling and playing bingo.

Private Mass of Christian Burial will be held at the St. Ann Catholic Church in Nashville, IL on Friday, November 13, 2020 with Fr. Andy Knopik officiating.  Interment will follow in the Liberty cemetery in Ashley, IL.

Friends may call at the Campagna Funeral Home in Nashville, IL on Friday from 9 AM until 11 AM.

Should friends desire, mass offerings or memorials can be made to the St. Ann Alter Sodality or the Alzheimer’s Association and will be accepted by the Campagna Funeral Home.